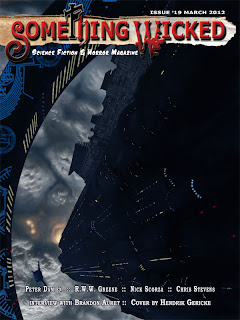 Something Wicked #19 is a real eclectic mix of stories all inspired by different subjects - a writer, a band, a past, a profession - and as such, it is extremely difficult to compare one against another as a means of gleaning which is more expertly told, as each has their good parts and their weak parts.

It Pays To Read The Safety Cards is a sci-fi short story by R.W.W. Greene, who was inspired by his work as a high-school teacher. The tale is told from the point of view of a young girl whose family is joining a group of colonists on their exodus from a stricken Earth to Proxima Centauri, four light years away. However, the expedition is sabotaged almost as soon as it begins by a group of religious terrorists who believe that everyone should remain on Earth to face the repercussions of what they have done to the planet. Greene’s narrator means that the story is told from an interesting perspective, from one who has not got the grasp of all the facts, but as the writer himself is a middle-aged man, his voice as a young girl seems at times forced and generic. The world which Greene creates is an interesting and imaginative one but the plot is rather predictable in its execution.

Stained, by Chris Stevens and inspired by his life, has a real sense of atmosphere to it - the title on its own is excellent because the story itself covers almost all the meanings of the word. The story follows Colin in his attempt to resurrect his dead grandfather using dark magic, and it is well worth reading this piece for the twist at the end alone. Although a great ambience is set up by the narrative it does feel a little stilted at the beginning, but the subtle characterisation easily overcomes this.

Ghost Love Score, by Peter Damien, is strongly influenced by the symphonic metal band Nightwish and one of their songs is taken as the title. A fan of the band myself, I listened to the song and found it fascinating as to how he had incorporated the lyrics into his own story and then had developed it from there. The story itself concerns a young woman, Charlotte, who has been abducted by a serial killer and is now being driven back to his hometown. Damien sets up a good feeling of Charlotte’s delirium, of the shift between her meditations back into reality, and you do get a real sense of the character slipping away. The encroaching sense of something supernatural is also subtly and cleverly put into play, but I feel that the ending is too ambiguous to work with the rest of the story and as such leaves it on a rather weak note.

The Book of Love, a Lovecraftian style piece written by Nick Scorza, is possibly my favourite of them all. Scorza has really got into the writing style of Lovecraft or Machen but he brings his own style to the characters, making you really feel for them. The story concerns an antique dealer, married to a woman who does not love him back, who becomes influenced by a strange book. The plot behind this story could easily fill a novel and as such the writer does not go into as much detail as you would like him to, but the unnerving idea of possession, of love being dangerous and the overarching sense of ‘be careful what you wish for’, makes this an enchanting read.

As well as the short stories, this issue of Something Wicked also features Sixth Sense of Humour: Twisted Sinister, by Mark Sykes, who explores the idea of plot twists in short stories and explains how Roald Dahl does the short story so well, a book review of Stephen King’s time-travel novel 11.22.63 by Deon van Heerden, which was so enthusiastic that it now makes me want to track the book down and read it, and a thorough, spirited and informative interview with Brandon Auret by Joe Vaz.

All in all, this issue of Something Wicked is an diverse and interesting mix, and is well worth a read.

Something Wicked can be read for free online or bought as an ebook edition here.
Posted by Jenny Barber at 07:11

Email ThisBlogThis!Share to TwitterShare to FacebookShare to Pinterest
Labels: jr, magazine, something wicket