The Satyr's Head: Tales of Terror 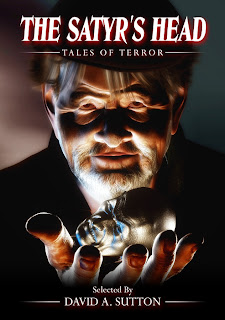 In 1975 a slim paperback boasting a fabulous cover by Patrick Woodroffe and bearing the title The Satyr’s Head and Other Tales of Terror was published by Corgi. And now, 37 years later the editor David Sutton has reissued the anthology on his own Shadow Publishing imprint, but with the subtly altered title to The Satyr’s Head: Tales of Terror. This time the equally striking cover comes from Steve Upham.
The Satyr’s Head includes ten stories by Ramsey Campbell, Brian Lumley, Joseph Payne Brennan, David Riley (who wrote the “title” story) and others. I don’t know if the editor deliberately chose stories on a theme, but the prevailing one is of angst, of guilt. And of people receiving their just, or unjust, reward from something supernatural and/or evil (but fortunately steering away from the worse excesses of some of the stories in the Pan Book of Horror Stories). As such, reading all these tales in one go may come across as somewhat downbeat and depressing. As with many other anthologies you may do best by dipping into it now and again.

I read this book in the early 1980s, a few years after initial publication when it was already difficult to buy. Therefore Sutton’s reprinting of it is very welcome. But my tastes have moved on and I didn’t get the same frisson on re-reading these tales now. The story that worked best for me this time round was Lumley’s Aunt Hester, which felt as fresh as it did then (even though poor Aunt Hester’s fate doesn’t come as much of a surprise). The stories are obviously of their era. Having said that, this anthology is a must; it should be bought and read by all fans of horror tales, particularly the younger ones who missed out on The Satyr’s Head and its contemporaries when they first appeared.

A few years before Satyr’s Head, David Sutton edited two volumes of New Writings in Horror and the Supernatural. I’d like to see these reprinted (unless they have been and I missed them). Sutton’s Shadow Publishing has a number of titles lined up, including The Female of the Species and Other Terror Tales by Richard Davis. Let’s hope the imprint grows from strength to strength.

The Satyr's Head is £5.99 from the Shadow Publishing website here.
Posted by Jenny Barber at 06:44