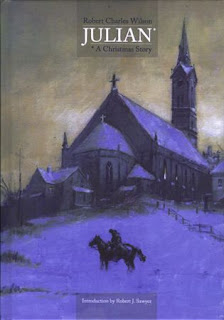 The Dealers’ Room at Eastercon 2012 was a dangerous place, financially speaking. I bought a load of books, including a number of older PS Publishing titles, such as Julian by Robert Charles Wilson. I missed this book when it was published back in 2006; I am very happy to have rectified that omission.

The cover is an atmospheric painting by Edward Miller which, although not quite depicting a scene in the story, complements the feel of the tale to perfection. Julian is a novella (approx 80 pages), a story set in the year 2172, a post apocalyptic America. The oil has all gone, diseases have ravaged the population, technology has gone backwards, the country had fought a war against Brazil and is at war once more, now against the Dutch in Labrador. All very 1984-ish; all reminiscent of other tales such as Earth Abides and A Canticle for Leibowitz. But there is no all seeing Big Brother. There is a President, though, due to run again in an election with just one candidate.

In the village of Williams Ford, Julian Comstock and Adam Hazzard are 17 year old boys and best friends – although etiquette should have kept them separated. Julian is an aristo, Adam a leaser’s son, a class well below. There are other differences but these are nothing compared to their sense of wonder, their love of books (the rare artefacts left over from by-gone days).

Then the Reservists – a sort of militia – arrives, to take the vote and to begin the draft. The war against the Dutch is faring badly, it seems. Adam is prepared to do his duty for America – it’s what he’s been brought up for. But Julian sees other motives. After all, he is a nephew of the President; his father was hung for treason; and Julian fears the worse. And so the boys seek to escape…

I haven’t read anything by Robert Charles Wilson before; at least not knowingly – maybe a short story here or there. I will keep an eye out for his work in the future. In his introduction, Robert J Sawyer says that Wilson is an excellent writer. Based on this evidence, I agree. The narrative flows seamlessly. The prose is perfect, with no meandering off topic; it is always precise, crisp. The characters, particularly Adam (the narrator), come across as real, with fears and concerns we all recognise. And the milieu is captured to a T – Wilson doesn’t need a hundred-thousand words to create his world, although I can see the story of Adam and Julian continuing in further stories, novellas or novels. Recommended.

(Note: Just checked online and indeed the story has been continued: Julian Comstock was published in 2010 by Tor books).

Julian can be bought from the PS Publishing website here and more about Robert Charles Wilson can be found on his website here.
Posted by Jenny Barber at 17:36