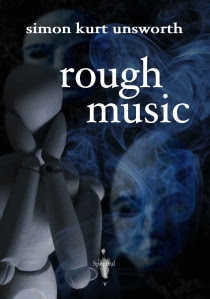 If this novelette (or longish short story) were appearing in a mass market anthology instead of being published as a chapbook with a limited print run (Spectral Press) I’m sure it would already be considered as a little literary classic, a modern apologue about sin, guilt and punishment.

Cornish, a man who has been recently cheating on his wife, keeps waking up in the middle of the night because of the noise made by a masked individual beating on a pan. The noise, that nobody else seems to hear, becomes increasingly loud as the masked man is joined by a whole group of people. Little by little some of the mysterious performers disclose their true identities , so much so that it becomes apparent that Cornish is the target of the night racket.

Unsworth’s narrative style is allusive but solid, as shown by the excellent initial description of the sensations elicited by waking up around 3 a.m., an experience we are all familiar with.

Imbued with a strong symbolism and seasoned with a touch of old fashioned moralism, the story confirms once again what various masters of dark fiction have been teaching us in their work, namely that the truest, scariest horror in life lies within us, at the very depth of our soul.

Rough Music is available from Spectral Press here. More information about Simon Kurt Unsworth can be found on his blog here.
Posted by Jenny Barber at 12:06