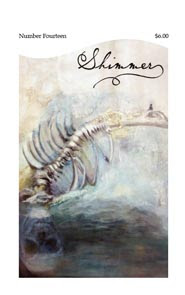 Shimmer is a very rewarding magazine to read because it always contains a real mixture of different genres, worlds and characters within it, and issue #14 is no different, with a range of different stories and different talents within it.

Food My Father Feeds Me, Love My Husband Shows Me by A.A. Balaskovits is the first story in the issue and is definitely one of the best. The story follows the daughter of a ‘great man of meat’, who is then married off to a vegetarian, thus forced to live a vegetarian lifestyle. Her obsession with the blood and meat she misses so much leads her to make a terrible discovery and terrible choice. This story is such a gem because the descriptions of blood and gore are utterly striking and vivid, staying inside the reader’s head for a long time after they have finished the story. There is also a real sense of foreboding inside this story which really keeps you reading. Perhaps the ending is a little rushed and unclear, but this does not do much to tarnish the shine of this otherwise excellent tale.

Chinvat by Sunny Moraine is in comparison a slightly weaker story, slightly outshone by the one that comes before it, which is a shame as it does have some good elements to it. The narrative follows a journalist who decides to shadow Denn, an old man who stops and helps the suicidal trying to jump off the Golden Gate bridge. The protagonist’s personal experiences and past intertwine neatly with what happens in the story and the setting is well described, but the plot feels rather aimless and wandering, and the back-story of what has happened to the world is not explained fully enough to be properly satisfying.

Made of Mud by Ari B. Goelman is a rather charming little tale, well executed. It follows a young boy’s experiences with the mudlings, small creatures who dig themselves pits in the soil and turn into mud if you try to separate them from these pits. The use of a young boy’s voice in this story is very effective and well written, and the idea of the mudlings is an intriguing one, though more back-story to these creatures would have made this better.

This House was Never a Castle by Aaron Polson is another striking story with good imagery. The story is about a boy and his two sisters who are living and hiding inside a magical house while what can only be described as a ‘plague war’ goes on outside the walls. The sense of entrapment, of a tentative peace which does not last, is palpable in this story, and although not everything is explained, the writer gives you enough hints for you to put the story together yourself.

Minnow by Carlea Holl-Jensen is a very short story, reminiscent of a dream where nothing makes sense. Whilst the descriptions are interesting and engaging, they are also ambiguous to the point of confusion.

Trashman by A.C. Wise is a story with excellent characterisation. It follows a young man’s experience with the trashman - part human, part something else entirely - who reads the lives of people by what they put in their trash. The protagonist’s struggle between his unwillingness to talk to the trashman and his desperate need for the man’s help is wonderfully portrayed, and the trashman himself is thrillingly creepy.

We Make Tea by Meryl Ferguson is another brilliant story in the magazine, following a futuristic group of robots on a plantation, who, after being abandoned for many years, are finally visited by a lost and distraught human. This story is fantastically imaginative and clearly well thought through, the dialogue is spot-on and the characterisation of the different robots very enjoyable. I feel that the ending is especially good in this story.

Bad Moon Risen by Eric Del Carlo is rather a generic idea, describing a post-apocalyptic world haunted by humans who have been changed into wild beasts. Whilst the action in the story is gripping and well written, the characters and plot line have been written many times before, and as such the story is not a particularly memorable one.

Some Letters for Ove Lindström by Karin Tidbeck has an lovely aura of mystery and suspense about it. The story is in the form of a collection of letters our character writes to their dead father, concerning their life and their mother. There is a real sense of the character waiting for something to happen and losing time as they switch from their past to their present.

Gödel Apparition Fugue by Craig DeLancey is a quasi biographical account of the scientist Gödel and his relationship with those around him, especially Einstein. This rather short account of his life is nonetheless compelling and reveals a very human side to this scientist.

Reviewer Sam Tomaino of SF Revu says that the stories in this issue of Shimmer ‘are like pieces of rich fudge, all very different but quite delicious’, and this is an opinion I definitely agree with, as there is something in this magazine for everyone, whether it be cannibals, robots or even just normal men. Well worth a read but be warned - it’ll make you want to subscribe to Shimmer!

To get your hands on a copy of Shimmer, check out their website here.